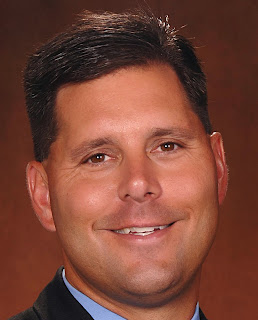 With a new ordinance before the city council on regulating billboards, it is not only important and fair, but the policy of Rotary to hear both sides of the issues. So this week we have Brent Bolick, Branch President of Clear Channel Outdoor to outline the industry efforts to help the Jacksonville community through Amber Alerts, crime watch notices and providing an inexpensive means for small businesses to advertise.

Brent Block spent 25 years growing up in the Indianapolis area and attended Wabash College, where he graduated in 1991 with a degree in Political Science.  Upon graduation, he became involved in local, state and federal campaigns as a political fundraiser for candidates who were successfully elected to the Indianapolis Mayor’s Office, the United States Senate and the Indiana Secretary of State’s office.

He has actively served on several community organization Boards including Crimestoppers of Central Indiana, the Indianapolis Humane Society and the Penrod Society.  He served as the Board President of the Indianapolis Humane Society from 2004-2005.  In 2006, he accepted the position of Vice President of Sales for the Jacksonville Division of Clear Channel Outdoor and relocated to the First Coast with his wife Amy and daughters Sophia (now 12) and Olivia (now 7).  While serving as Vice President of Sales in Jacksonville, he was the liaison to the Florida Outdoor Advertising Association (FOAA) regarding public service initiatives for organizations such as FLDE and also acted as a point of contact for both the Justice Coalition and the Salvation Army for various public service initiatives.

In September of 2010, he was promoted to Branch President of Clear Channel Outdoor in Jacksonville.  He is currently involved with public service initiatives utilizing their recently deployed digital billboard network with the Jacksonville Sheriff’s Office, First Coast Crimestoppers, the FBI, FDLE via the Florida Outdoor Advertising Association, the Duval County Supervisor of Elections, Duval County Emergency Management, the Jacksonville Humane Society, First Coast Homeless Pets, the Sulzbacher Center and the Police Athletic League.

Brent is the recipient of the Outstanding Citizen Award by Duval County Sheriff John Rutherford at the Justice Coalition’s 2011 Ted Hire’s Legacy Dinner for contributions made towards public safety via our digital billboard network.  He serves on the Board of Directors for First Coast Crimestoppers and the Jacksonville Humane Society.

November is Foundation month, a time for Endowment support and awareness.   There will be a $1,000,000 dinner this year in the Zone to honor any Rotarians in the Zone that make an outright gift or a bequest of $10,000 or more.  Our Rotary Zone encompasses Georgia, Florida and all of the Caribbean.  It will be held in Sarasota, Florida on February 8th, and of course we are looking forward to our District being represented at the dinner.  The featured speaker will be the President of Rotary International, Ron Burton.  Additionally, the Vice President of Rotary International, Anne Mathews will also be speaking. There will be entertainment and an opportunity to enjoy a very special evening.

When making a bequest or an outright gift, you can control where the money goes. You can designate as part of the gift how you want the funds spent.  Literally, you can give it to polio, to any area of focus, or any of the many other areas in which Rotary is active. This is your opportunity to leave a legacy that coincides with your Rotary passion.

While the aim of a $1,000,000 dinner is to raise a million dollars, that is no longer our goal as we surpassed the number in the first quarter of this Rotary year with $1,129,000 in gifts and bequests.   There are additional gifts already in the pipeline.   Bequest gifts are painless as we are gone, and they do not have any effect on your spouse if set up properly.

The dinner is for new gifts in this 2013-14 Rotary year.   This is new gifts of $10,000 or greater, not new major donors.  Existing major donors can step up to the next level, and attend the dinner as well.

For more information, please go to our website www.Rotaryzone34milliondollardinner.org

Send the completed applications to either Bill Woulfin or Debra Lowe (see the website for applications).

Board News
The Board of Directors has approved Meredith Porter for your consideration into membership.  Meredith's classification is Finance/Banking-Bank Marketing.  Her sponsor is Stevan Jones.  Anyone having an objection, please submit it in writing to the Board within ten (10) days.

The Gingerbread project still lives, and serves to put the Historical Society in the black.  Our club has stayed involved, after giving the event birth over 10 years ago.

If you have a tape measure, some gloves, and a screw driver/screw gun, you are almost overqualified.  Most of all, we need your hands to set up tables, string extension cords, setup our big lego-like walls, and decorate Christmas trees, among other things.

Please contact Mike Darragh, if you can make it.  Making this event Fun & Fast depends on having a large number of volunteers.   Thank you! 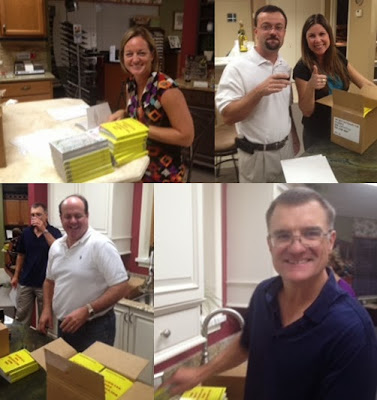 Food, Fellowship And Fun?
Rotarian Nonie Larson of the Fleming Island Club, and all the clubs of Clay County, have been raising funds this year using area restaurants willing to share an evening of dining for a percentage of revenue to fight polio. The past few months have generated $800.

Manny’s Bistro on November 25th is the next opportunity. For more information, contact any Fleming Island Club member.

Congratulations to the Rotary Club of New Smyrna Beach as they participated in the ‘World’s Biggest Commercial’, in honor of World Polio Day.