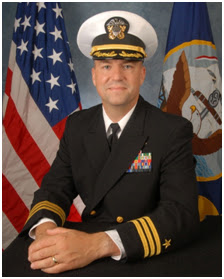 Meet Commander David M. Gardella
United States Navy
Commander Gardella, a native of Fort Thomas, KY, graduated from the United States Naval Academy in 1995 with a Bachelor’s Degree in Aerospace Engineering.  Upon completion of flight school, he earned his coveted “Wings of Gold” and was designated as a Naval Aviator in April 1996.  He subsequently proceeded to Patrol Squadron THIRTY, Jacksonville, FL to receive instruction on how to fly the P-3C Orion.  He joined Patrol Squadron SIXTEEN, Jacksonville, FL the following year for his first operational tour.  While completing two tri-site deployments to Iceland, Puerto Rico, and Panama and a deployment to Sigonella, Sicily, he attained multiple qualifications, to include Patrol Plane Commander, Mission Commander, and Instructor Pilot.

In October 2001, Commander Gardella transferred to Patrol Squadron THIRTY to serve as a Fleet Replacement Squadron (FRS) Instructor Pilot.  His next assignment was to Special Projects Patrol Squadron TWO, Kaneohe, HI in March 2004.  Upon completion of this tour, he joined of Patrol Squadron FOUR in August 2006 for his department head tour and deployed to the Pacific theater of operation.

In July 2008, Commander Gardella returned to the mainland serving again at Patrol Squadron THIRTY as a senior department head.  He specialized in standardization and procedural compliance for all P-3 and EP-3 units worldwide.

Commander Gardella reported to Fort Dix, NJ in July 2011 for Army familiarization training and subsequent deployment to Afghanistan in support of Operation ENDURING FREEDOM. He was assigned to Rule of Law Field Force – Afghanistan, a specialized unit under Commander, Joint Inter-Agency Task Force – 435, to develop and sustain the Afghan statutory justice system.  He was embedded in the British-led Helmand Provincial Reconstruction Team in Lashkar Gah, Helmand Province.

In June 2012, Commander Gardella once again reported to Patrol Squadron THIRTY where he now serves as the squadron’s Executive Officer.

Commander Gardella resides in Fleming Island, FL with his wife Mona, and their three daughters.

Sign-up to Ring the Bell for the Salvation ArmyWednesday, Nov 21, 2012
Publix at Southside Blvd and Old Baymeadows Rd.

Sign up sheets will be available on the tables during the weekly meetings.  There are open time slots available.  The current schedule is:

WHERE DO THE SALVATION ARMY DONATIONS GO?
As a leader in Christian faith-based human services in the Jacksonville area, The Salvation Army of Northeast Florida strives to meet the physical , emotional and spiritual needs of people in crisis.  Our many service
areas include the following… 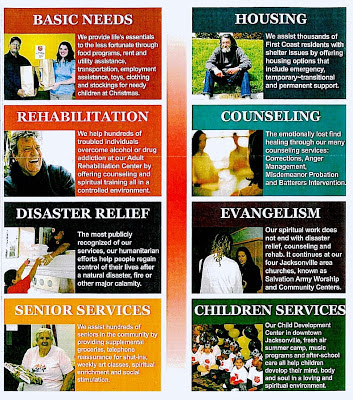 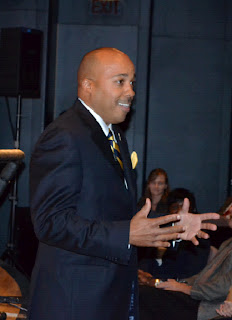 Roy Neal
South Jacksonville
Rotary Club's
Newest Memeber
Roy works at CSX as a Senior Account Manager. He is married to Abby, they have four children and they live in Green Cove Springs.  When asked to provide a few words about his family life he wrote, "…….I believe that people who are developed and exposed to opportunities are more prepared to have an impact on society.   We carry this principle into our family life and work to provide experiences that reinforce excellence and a need to serve others.  Having a wife that’s an educator is invaluable and helps to keep our four children on a distinct path."

The October 30th meeting theme was the Four-Way Test.  Four club members spoke about the elements of the test.

Is it the TRUTH?
Tyrie Boyer

Is it FAIR to all concerned?
Jason Burnett

Will it build GOODWILL and BETTER FRIENDSHIPS?
Jeremy Miller

Will it be BENEFICIAL to all concerned?
Rick Morales
Posted by Patti C at 10:14 AM No comments: