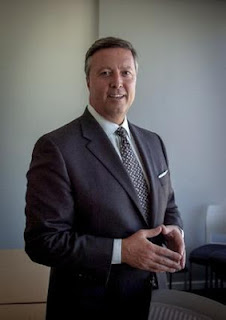 In assuming a leadership role, he realized a personal and professional dream to apply the skills he began acquiring with his liberal arts education at JU to help lead and develop people at his beloved alma mater to their fullest potential.

His 30 years on senior management teams at several of the world’s largest and best-known institutions, including Eastman Kodak, Bristol-Myers Squibb, ARAMARK, Wyeth and PepsiCo, helped refine his approach to leadership, capitalizing on the strengths of diverse teams to maximize talent, trust, connections and performance. President Cost is committed to helping mentor young talent, and likes to say it’s about “inspiring the good to be great.”

“Jacksonville University is a special place. We are committed to creating an extraordinary educational experience for our students – academically, socially and culturally – so that JU continues to nurture the visionary leaders who will shape our future,” Mr. Cost said.

Affable, confident and not above poking fun at himself for getting “a little jacked-up” – his version of passionate – over the things he cares most deeply about, he can often be seen around the beautiful JU campus bantering with students; texting alumni, Trustees or community members; or pulling aside faculty or staff members for a quick piece of advice on a new program or practice.

“Good coaching moves in all directions, and I learn something valuable here every day,” Mr. Cost said.

Mr. Cost graduated magna cum laude in 1981 from JU. As a JU athlete and four-year varsity letterman on the baseball team, he is one of the top 10 winningest pitchers in JU baseball history (.688 career winning percentage). As a freshman, he pitched the only 9-inning no-hitter in Jacksonville University history. After his undergraduate work, Mr. Cost evolved as a new JU alum, growing his career and family. Wife Stephanie has owned her own business and led many philanthropic efforts, daughter Melanie is a consultant in Washington, D.C., and son Drew works in management for Gatorade. As Mr. Cost built a successful professional career, he continued focusing his energy on becoming deeply invested in the success and growth of the University.​

He was selected one of Jacksonville University’s “75 Most Distinguished Dolphins” to commemorate the University’s 75th anniversary, and also received JU’s “Distinguished Alumni Award” in 2006. He joined the JU Board of Trustees in 2009, chairing the Board’s Enrollment and Retention Committee and Development Committee. He is also chair of the ground-breaking $85 million “Aspire: The Campaign for JU 2016” comprehensive giving campaign, which is designed to support faculty development, student scholarships, honors and undergraduate research, the JU Annual Fund and unrestricted giving needs; expand the new College of Health Sciences; bolster campus enhancements; and enhance student life.

“In my heart I never left JU. I’ve invested more time and energy here than anywhere. It’s a special place. (JU Past President and Chancellor Emeritus) Fran Kinne was a huge part of my life and taught me what a real leader is,” Mr. Cost said. “(Retired) President Kerry Romesburg taught me the importance of listening, and viewing problems from all angles to arrive at the best solutions to move forward.”Over the years, Mr. Cost involved himself in numerous campaigns to support and improve JU, including spearheading the development of the running trail on Dolphin Green, the C.P. Cost indoor hitting facility at JU’s baseball stadium, the “Artis 53” Scholarship Campaign, “Adopt a Classroom” and many others.

Building on the education he received at JU, Mr. Cost crafted an impressive background as an experienced business leader, adding to his academic credentials along the way with an MBA in Finance and Economics from the William E. Simon Graduate School of Business at the University of Rochester. Over 30 years at several FORTUNE 500 companies, he acquired sophisticated skills in marketing, strategy, public policy, capital markets, crisis and issues management, investor relations, government affairs, business development, philanthropy, brand and corporate communications, customer outreach and retention, mergers and acquisitions, regulatory affairs, corporate social responsibility, reputation management and alliance development.

He taps into those experiences regularly in his role as JU’s leader, he noted.

“We work hard on the kind of shared governance – shared leadership, really – that makes an institution work best. If you use that model, you can move effectively from consulting people, to cooperating, and then to really collaborating. And that journey is important to making sure we develop and support the best possible JU for students, faculty and staff.”

During his professional business career, he was recognized as part of successful senior management teams known for innovation (FORTUNE’s “Most Innovative Companies”), workplace environment (“Best Places to Work”), inclusion (“Best Places for Women,” “Best Places for Hispanics” and others) and progressive management (“Most Improved U.S. Investor Relations Program”), among others.

Handling high-profile, public, on-the-record interactions with media, investors, donors, government officials, partners and stakeholders, he has been honored as one of the top business communicators in U.S. corporations (The Holmes Report, 2011).

Through it all, he has remained closely connected to higher education through his years of committee, council and board work, as well as through a career path that includes clients on dozens of college campuses.

His work ethic and commitment to giving back don’t stop at the business or academic world: Mr. Cost has devoted numerous hours to civic and community volunteerism, including, among many others, co-chairing the Franklin Caucus (business leaders dedicated to positive community involvement and economic development); co-chairing the Philadelphia Leadership Exchange (75 public and private sector senior leaders sharing best ideas among major geographic regions); working on the Philadelphia 2016 Olympic organizing effort; helping youths in Students in Free Enterprise; and helping Community Volunteers in Medicine, receiving the Pillar Award for his philanthropic and leadership service to provide health care to workers in need.

“Ultimately, to me – and this counts for colleagues, the community and students, staff and faculty – leadership is all about service. You need to meet people, make connections, create improvements and have an impact … every day,” Mr. Cost said.

“There is no leadership without followership. There must be trust in a leadership team to achieve the pace and trajectory to truly succeed. We are absolutely committed to making sure our students and faculty have everything they need to excel at Jacksonville University.”
​
Introducing Our Newest Members!! 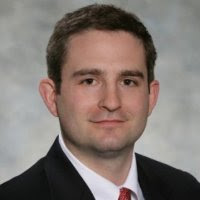 Ryan Maloney is married to Amy, and they will celebrating their 10th anniversary in August of this year.  They live in San Marco and have two children, Christopher who will be 7 in a few weeks, and Sarah who just turned 5.  Ryan is involved in the community as mentor with the United Way Achievers for Life program and as a member of the YMCA's Downtown District Board.  He is also a huge Seminole football fan, and enjoys attending Jaguar games as well.  Ryan tries to work out a couple times a week, and also enjoys playing tennis. 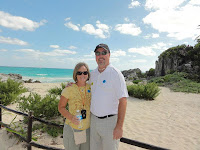 Robyn Watson is married to Doug Watson, an insurance agent.  They met and started dating 16 years ago and have been married for almost 7 years.  We have two four legged children (golden retrievers), “the boys”, Wrigley (3) and Murphy (1). 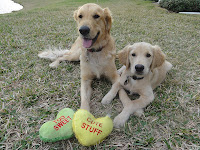 When not working, Robyn enjoys spending time with family and traveling.  She also loves spending time in the Florida sunshine - playing golf, hanging out at the beach/pool or playing out in the yard with the boys.  She recently started running and completed her first Gate River Run in 2012 and her first half marathon in Savannah in Nov 2012.  She is signed up to complete another half marathon in April in Kansas City.

Additionally, Robyn belongs to a neighborhood knitting club and she enjoys reading and scrapbooking.


Plan to stay after the Rotary meeting on March 19th to pack Easter baskets for our Literacy Class that members are mentoring at San Jose Elementary School.  All items to fill the baskets will be there
Nothing else is needed!  This will also count as a makeup for those who may need it.

Equally important, try to attend the delivery of baskets on Thursday, March 21st at 2:00pm at the San Jose Elementary School, if possible 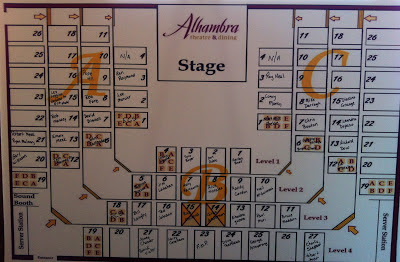 Our club has committed to buying the entire show for the evening and we will have exclusive use of the venue.  Reception will begin at 5:30 PM with the bar being on the main floor.   Dinner service will be 6:30 PM to 7:30 PM.  Show begins at 8:00 PM.

Each club member is responsible for the sale of 4 tickets at $75.00 each for a total of $300.00.  Your account will be billed automatically March 6.  *Sale or purchase of a sponsorship at any of the levels below satisfies your ticket responsibility. 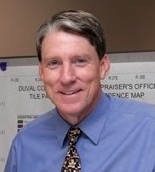