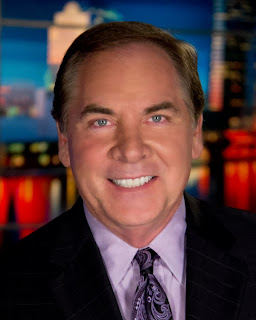 A native of Baltimore and a graduate of the University of Maryland, Sam Kouvaris began his broadcasting career in Charleston, S.C., as the sports director at the ABC affiliate, WCBD.  He also worked as a sports reporter in the Washington/Baltimore area.  In June 1981, Sam joined WJXT, formerly the CBS affiliate in Jacksonville, and was promoted to sports director in March 1982. On Jan. 1, 2000, Sam was given additional duties as managing editor of the sports department at WJXT.

As sports director/managing editor, Sam's responsibilities include the presentation of the daily newscasts and the leadership of the sports department.  Along with the news director and general manager, he helps determine the sports coverage policy throughout the year.  Sam's play-by-play experience stretches from football to polo, and he has called events for CBS, NBC, ABC and ESPN. A three-sport varsity athlete in high school, Sam also participated in football and baseball in college and on the semi-professional level.  He still stays active in sports as a tri-athlete and the occasional fantasy baseball camp.  As part of his sports coverage, Sam has tried out for the Jacksonville Tea Men and the USFL Jacksonville Bulls. He served as voice of the Tea Men of the NASL in 1983.

A popular feature on WJXT's Channel 4 News at 5:30 p.m. is "Stump Sam."  Viewers are invited to send in their sports questions to see if they can "stump Sam." Sam has maintained about an 80 percent correct answer rate since the feature's inception in 1990.  Sam also maintains a sports-themed Web site -- SamSportsline.com -- with current sports information, as well as personal commentary.

Sam calls his experience flying Navy tactical aircraft the highlight of his career.  After a promotional flight with the "Blue Angels," Sam completed six weeks of training from the U.S. Navy at Naval Air Station Jacksonville and Cecil Field, and was qualified to fly in the FA-18. He has done stories with several squadrons in the Atlantic Fleet and has one carrier arrested landing and launch.

His sports commentaries can be heard twice each day on WFYV-FM in Jacksonville and on the syndicated Lex and Terry radio show, which is broadcasted throughout the country.
A member of the Pro Football Hall of Fame selection committee, Sam is one of 38 electors asked each year to vote on candidates eligible for induction into the hall.  He also is a designated voter for the Heisman Trophy and the College Football Hall of Fame.

Sam is an Emmy Award winner and has won the Associated Press Broadcast Award, as well as other honors, including Sportscaster of the Year by numerous organizations.  Music and drama are among his hobbies.  Sam plays several musical instruments, including the trumpet and guitar.  He has appeared as the lead vocalist for the St. Johns River City Band at several "Big Band" concerts.

He serves on the Board of Directors for numerous charities in North Florida and is active at St. Joseph's Catholic Church.  Sam lives in the Mandarin area of Jacksonville with his wife.  Together, they have three children. 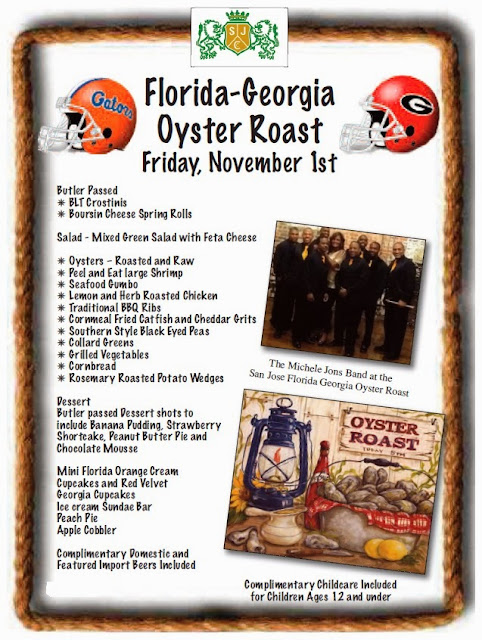 What:  FL-GA Oyster Roast (dinner, live band)
When:  6:30pm, Friday, Nov 1 (night before the game!)
Where:  San Jose Country Club
How much?  $50 per person, inclusive
Dress:  Casual, long pants for gentlemen and your school colors!


with great food and entertainment!


Take an American Hero to Lunch
Show your appreciation by buying lunch for a wounded warrior. 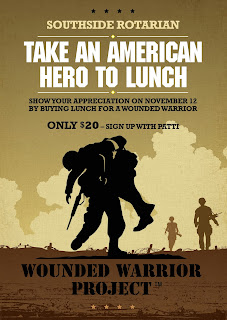 DG Art thanked Jeri Williar, our District Interact Chair, for a successful Interact Summit. The annual summit was much like a District Assembly, with the event being held at St Joe’s Academy in St Augustine with 67 Interactors and 19 sponsors from 19 different schools in attendance. They learned about Rotaract, RYLA, how to run a great meeting, fund raising, best club practices and the family of Rotary. Pictures can be found on the District Website.

DG Art also mentioned PETS (Personal Energy Transportation System). This is a project of the Rotary Club of Orange Park and supported by Rotarians throughout our District (including our club). Any club looking for a project should take a look at PETS.